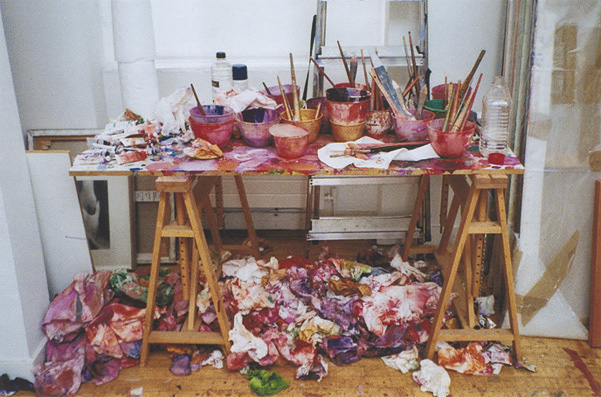 2001
Invited to give the Hermione Lecture at Alexandra College, Dublin. Entitled ‘A quest: Some reflections on my experience of being a painter’, it is published in The Recorder: The Journal of the American Irish Historical Society later that year.14 The lecture is accompanied by a video presentation Empyrius, by her son Pierre, showing her at work on the commission.

2002
Paints In Memoriam, J-P R in homage to her friend Jean-Paul Riopelle who had died in April. Dorothy Walker, art critic and historian and a good friend to both Anne and le Brocquy, dies.
solo exhibition
The Garden of Love, Taylor Galleries, Dublin. Anne Haverty writes in the catalogue: ’These paintings make me think of Byzantine art, which was also both conceptual and sacred. In their obstinate preoccupation with otherness, they are fundamentally spiritual. In a world less prosaic than ours, they might hang in a church or temple or, if that can be imagined, the cave of a sensualist turned Anchorite.’*

2003
Re-presents lecture entitled ‘A quest: Some reflections on being a painter’, this time at Dublin City Gallery The Hugh Lane, again accompanied by the video presentation Empyrius. Twelve paintings from Madden’s series A Space of Time are temporarily on view in the Oval Room. The series derives its title from Leonardo da Vinci’s notebooks.
solo exhibition
Kilkenny Arts Festival, Gallery One – paintings.
group exhibition
Éigse, Carlow Arts Festival. Madden presents an artist’s talk on 14 June at St Patrick’s College.*

2004
Awarded an honorary degree from University College Dublin on the occasion of its 150th anniversary celebration, which recognizes those who have made exceptional contributions to Ireland, both at home and abroad.
Madden embarks on her Aurora b. series of works, their source a glowing solar phenomenon of coloured lights appearing in the night sky of the Northern Hemisphere, known as the Aurora Borealis or Northern Lights.
group exhibition
A Vision of Modern Art, In Memory of Dorothy Walker, Irish Museum of Modern Art, Dublin, an exhibition in memory of her friend the art critic, writer, and founding IMMA board member.*

2006
A 60-minute documentary on the life and work of Anne Madden, Anne Madden: Painter and Muse, is made by Mind The Gap Films. Written and directed by Bill Hughes, produced by Bernadine Carraher, with executive producer Larry Mullen, it is launched at the National Gallery of Ireland and airs on RTE 1’s Arts Lives on 25 July. Contributors include Bono, Anthony Cronin, Aidan Dunne, Seamus Heaney, Enrique Juncosa, Richard Kearney and Louis le Brocquy. Winged Figure, painted during the filming of the documentary, is loaned to Dublin City Council and put on public display in the 18th-century rotunda of Dublin City Hall for an extended period.
group exhibition
Irish Art of the Seventies, Irish Museum of Modern Art, Dublin.

2007
Anne Madden’s retrospective exhibition takes place at the Irish Museum of Modern Art. Invited to present the Winter Lecture at the Irish Museum of Modern Art.
Compiled by Karen Sweeney with Anne Madden,  incorporating newspaper cuttings, notebook material, journal entries, exhibition catalogues and a series of exchanges and conversations with the artist that took place in Dublin throughout 2006 and 2007.
The well-known American jazz impressario, George Wein, donated Winged Figure (2004, oil on canvas, 390 x 342 cm), to Dublin City Council. The large-scale painting was donated to go on permanent display in Dublin City Hall.

2008
On 16th October Anne Madden received the prestigious award Officier des Arts et des Lettres from the French Government in recognition of her services to contemporary art. The award was bestowed by the Ambassador of France to Ireland Yvon Roe D'albert in the French Embassy.