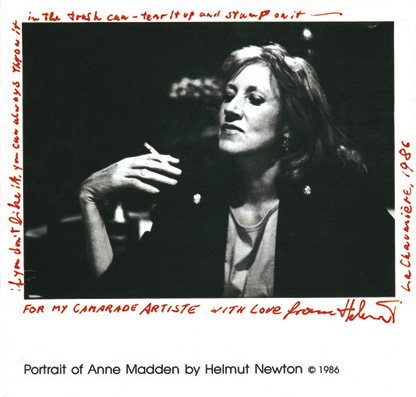 1991
Unveiling of The Great Book of Ireland at the Royal Hospital Kilmainham, in which Anne’s work is included. The book is the brainchild of Gene Lambert of Clashganna Mills (a community-based resource centre for the disabled and their families) and Theo Dorgan of Poetry Ireland. Anne’s contribution responds to two poems written directly on vellum by her friend Anthony Cronin, to which it was joined. The book is a single volume containing work by 140 poets, 120 painters and nine composers. Visit to Japan for Louis le Brocquy’s touring exhibition. Audience with Her Majesty Empress Michiko of Japan, who spoke of Irish poets and their work, especially Seamus Heaney, whom she had met previously.
solo exhibition
A Retrospective Exhibition, RHA Gallagher Gallery, Dublin. Madden’s first mid-career retrospective, spanning an output of more than 40 years, sponsored by the Arts Council of Ireland, is opened by Taoiseach Mr Charles J. Haughey. In his opening speech, Mr Haughey states that the retrospective would ‘confirm her status as an Irish artist who has made a considerable contribution to the art of her time’. Subsequently travels to Limerick City Gallery of Art, where it is opened by Mark Patrick Hedeman and ‘An caoineadh’ is sung by soloist Noirín ní Riain. Aidan Dunne writes in the catalogue essay, ‘Yet even as they [the paintings] might seem to incline towards Greenbergian purity, they flout its terms, insisting on depth in flatness, on the creation of a viable imaginative space, a world of individual possibility. It is this quality that makes them, finally, affirmative: emblematic paintings of their time’ (p. 19).*
group exhibitions
Inheritance and Transformation, Irish Museum
of Modern Art, Dublin.
Art Inc, Guinness Hop Store, Dublin.
Premiers chefs d’œuvres des grands mâitres européens, Museum of Tsukuba Ibaraki, Tokyo, then Osaka and Kyoto, touring exhibition arranged by Mondiale Events Organization.

1992
Francis Bacon dies in Madrid, and is mourned by Madden and le Brocquy.
solo exhibitions
Blue Paintings 1988–1990, Crawford Municipal Gallery, Cork.
Drawings from Masters, Kerlin Gallery, Dublin. The exhibition includes 30 graphite drawings, all with identical size and format, inspired by works of Turner, Piero della Francesca, Manet, Vermeer and Caravaggio, among other masters. In a brief foreword to the catalogue, the artist states: ‘When I look at paintings, it is the underlying order, composed of abstract elements that interests me more than their narrative content.’*
group exhibition
Artistic Associations, Gillian Jason Gallery, London (joint exhibition with Louis le Brocquy).

1994
Anne’s biography of her husband, Louis le Brocquy: A Painter Seeing His Way, published by Gill & Macmillan, is launched by Seamus Heaney in early January. In his speech, Heaney describes the book as ‘a mutual venture… both [Anne and Louis] inhabit the psychic space in the reader’s head equally with the same conceptual presence that they maintain in the studio at Les Combes’. Receives an important mural commission from Dr Ronald Tallon of Scott Tallon Walker Architects, who designed the O’Reilly Hall at University College Dublin, to execute one of ten 400 x 200 cm paintings incorporated into the wall panels of its Aula Maxima. Her contribution The Boat (1995) relates to her Odyssey series insofar as it engages with the ‘journey’.

1995
Anne’s mother dies.
Embarks on the Icarus paintings.
Returns to France early in the year after the launch of of Louis le Brocquy: A Painter Seeing His Way and begins the Odyssey series. The boat becomes a metaphor for the artist’s journey.
solo exhibition
Kerlin Gallery, Dublin. Consists of recent paintings, including Le Jardin III and Doorway to the House of the Tragic Poet, Pompeii.
group exhibition
Famine, Claremorris; touring Ireland and Boston USA, 1995–7.

1997
Irish Embassy in Paris shows, on loan from the artist for five years, Passage – a painting addressing one of the many tragic aspects of Ireland’s Great Famine, the coffin ships or famine boats. (Publication with an introduction by Patrick O’Connor, the Irish Ambassador to France, Department of Foreign Affairs). *
solo exhibitions
Odyssée et Icare, Château de Tours, Tours, and the Centre International d’Art Contemporain, Carros.*
Trajectories: Paintings 1995–1997, Hugh Lane Municipal Gallery of Modern Art, Dublin. The exhibition includes 32 large Odyssey and Icarus paintings and is opened by the Lord Mayor of Dublin, Councillor John Stafford.*

1999
Sell house in France. Packing up contents of library, Anne comes across the William Blake poem ‘The Garden of Love’ when she opens a book of poetry. Two lines repeatedly run through her mind – ‘I went to the garden of love… And I saw it was filled with graves’. This image resonates as a garden of the mind, a space which cultivates memory and harbours loss and love.
solo exhibition
Empyrius (906 x 523 cm) is inaugurated in the Centre International d’Art Contemporain in the 12th-century medieval castle Château de Carros, along with an exhibition of studies and paintings. The work is painted directly on two strips of large canvas in Anne’s nearby studio before being seamlessly mounted in situ to the vaulted ceiling. Marcelin Pleynet’s text,
‘Le Ciel de la peinture’, is displayed at the entrance of the room housing Empyrius. Anne donates this work to the Municipality of Carros before leaving France.*