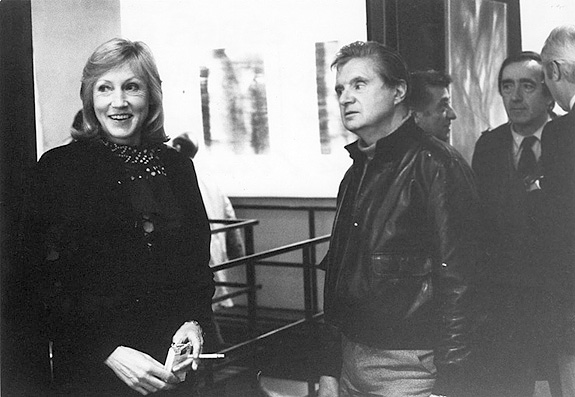 Jean-Louis Prat, the director of the Fondation Maeght, buys four drawings for the collection and encourages Anne to produce more, which results in a series of large works in graphite.
Stops painting for a time. Devotes her energies to drawing, which results in a series of large works in graphite, graphite and oil paint on paper mounted on wood entitled Openings. These works would later be included in the exhibition of her work at the Fondation Maeght in 1983 and will represent her in ROSC ’84. During this period, she incorporates another symbolically charged space: the House of the Tragic Poet in Pompeii. Had long been moved by the sudden apocalyptic destruction of Pompeii (as a mirror of a possible nuclear holocaust), the ruined Roman city whose inhabitants perished when Mount Vesuvius erupted in ad 79 and which was completely buried for 1,600 years before its rediscovery in 1748 and subsequent 19th-century excavation. Had not yet visited Pompeii when first embarking on the series.
Interview with Anne Madden by Richard Kearney, entitled ‘The stone’s in the midst of all’, appears in the Crane Bag magazine, (initiated and edited by Kearney with Mark Patrick Hederman, to address Irish contemporary arts, politics and philosophy). Entitled ‘Images of the Irish Woman’, the issue ‘attempts to confront the various images of the Irish woman as she appears today on this island at the westernmost extremity of Europe’.10 Anne’s graphite on paper study Sheela-na-gig (1979), reproduced in the magazine, depicts the one embedded over the doorway
of Kilnaboy Church, County Clare.
solo exhibition
Galerie Le Dessin, Paris. Includes graphite drawings.
group exhibitions
Dessins de la Fondation Maeght, Fondation Maeght, Saint-Paul, France.*
The International Connection, Irish Art in the Seventies, The Round House Gallery, London. Selected by Cyril Barrett, the exhibition is part of ‘A Sense of Ireland’, The London Festival
of the Irish Arts.*

1982
Embarks on Portal and Window series, which she sees as openings into another space, interior or exterior, finite or infinite.
Anne Madden and Louis le Brocquy organize (with the support of the committee chaired by Hassia Jameson) a collection of art works to be auctioned for the benefit of Amnesty International, in order to raise funds to acquire an Irish headquarters. The auction, held at the Bank of Ireland, in Dublin’s Baggot Street, contains works by many internationally known artist friends. The auction raises $250,000. (Catalogue: Artists for Amnesty).
solo exhibition
Taylor Galleries, Dublin.
group exhibition
Salon de Montrouge, Paris.

1986
Elected to Aosdána, a unique affiliation to honour creative artists in Ireland, established by the Arts Council of Ireland in 1981. Attends the opening of the newly acquired headquarters of Amnesty International, Irish section, in Shaw Street, purchased from the funds raised by the 1982 ‘Artists for Amnesty’ auction which Madden and le Brocquy organized. The building was formally opened by Seán MacBride, head of Amnesty International worldwide, son of the nationalist revolutionary Maud Gonne, on his 80th birthday. It was attended by Bono and The Edge of rock band U2, who would become loyal supporters of Amnesty and friends of Madden and le Brocquy.
solo exhibition
New Works, Armstrong Gallery, New York. Madden’s second solo exhibition in New York takes place, to critical acclaim in the New York Times (John Russell), Art in America (Tony Towle), and Art News (S.G.). It includes Traces of Pompeii (1984–5) and Window (1985).*
group exhibition
Art Cologne 20, Internationaler Kunstmarkt.*

1987
After visiting Paris, where they see their friend Samuel Beckett and speak of Anne’s brother’s death, Beckett writes to her saying, ‘Don’t be depressed about your dark. It’s it nagging to be said’.12  The ‘it’ refers to the dark place in which she had found herself since her brother’s death. He urged her to ‘tackle her dark’. Madden compiles a memorial book to her brother Jeremy, called The No Word Image. It reflects his thinking on the dynamic nature of the visual image in theatre and film, and the language of gesture in mime and dance and includes extracts from the 82 notebooks he left behind. His essays ‘The language of gesture and movement’, ‘The comic figure’ and ‘The no word image’ are edited by Dr Richard Kearney to form a single thesis entitled The No Word Image. His 1967 Royal College of Art diploma film Tune shows his preoccupation with mime. Tune is transmitted by RTE in July, the same night as the book launch. Anne notes in her journal she keeps trying, unsuccessfully, to ‘tackle her dark’.
solo exhibition
Recent Works, Taylor Galleries, Dublin.*
group exhibitions
À Propos de dessin, Galerie Adrien Maeght, Paris.*
Women Artists in Ireland 1940–1975, the Hugh Lane Municipal Gallery of Modern Art, Dublin. Part of a three-pronged exhibition, the other two being Irish Women Artists from the 18th Century to 1943, National Gallery of Ireland, Dublin*, and Women Artists 1975–1987, Douglas Hyde Gallery, Dublin.