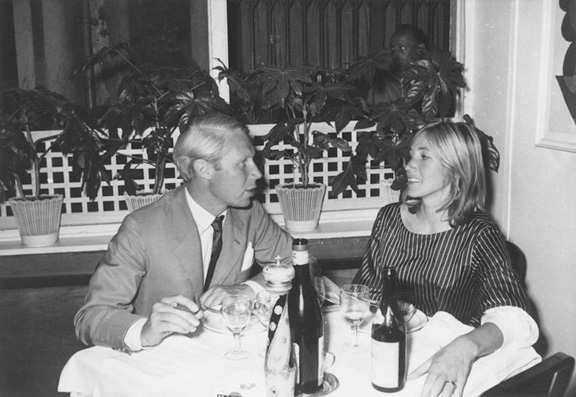 Involved in a riding accident in Ireland while hunting. Horse and rider jump into an icy lane, and Anne’s mare falls on top of her, causing severe spinal injuries. Attends the Chelsea School of Arts and Crafts, London.
Paints Self Portrait (1950).
Attempts series of large crucifixions, which she destroys, judging them unsatisfactory. At the Chelsea School of Art, very impressed by seeing Sergei Eisenstein’s film Battleship Potemkin (1925); Un Chien Andalou (1929) and L’Age d’Or (1930) by writer/director Luis Buñuel and Salvador Dalí; and Jean Cocteau’s Le Sang d’un poète (1930), starring Lee Miller. Sees many films at the British Film Institute, London. Frequents the National and Tate Galleries and the British Museum. Travels through France and Spain visiting museums and churches. Awestruck by the Prado and deeply affected by Goya’s dark paintings.
With friends, follows matadors El Litri, Aparicio and Ordonez around the bullrings of Spain.

1951
Travels to Florence, Rome and Venice on separate journeys. Is drawn to the pre-Renaissance paintings of Cimabue, Giotto and the Sienese School, and to the early Renaissance art of Mantegna, Masaccio, Uccello and Piero della Francesca.
group exhibitions
Artists of Fame and Promise, Leicester Galleries, London.

The Mirror and the Square, Burlington Galleries, London.

1952
Represented in the Irish Exhibition of Living Art with her painting Horse and Crows (1950). Louis le Brocquy later comments: ‘I was drawn to a strange painting of crows strutting in a field under an arc formed by the legs and belly of a horse. Its young author, Anne Madden, was unknown to me, but the painting itself opened to me a new, very personal field of vision.’1 Leaves the Chelsea School of Arts and Crafts, halfway through the course, because of her perception that teachers are educating students to become teachers. On a visit to Rome, discovers in the church of Santa Maria Nuova the restored Una Madonna molto antiquata, a very rare, anonymous, fifth-century banner, overpainted in the 12th and 15th centuries. It is on view for the first time in the vestuary; she is the sixth visitor. Visits Greece to see her sister and travels extensively there.
group exhibitions
Irish Exhibition of Living Art, Dublin.
The London Group, London.
Royal Hibernian Academy, Dublin.

1954
Stays on Inis Mór, the largest of the Aran Islands, for six weeks in summer and writes in journal, ‘All stones and bones of animal skulls and skeletons.’
group exhibition
Royal Hibernian Academy, Dublin.*

1956
On 20 November, Madden meets the Irish painter Louis le Brocquy in London.
First major London exhibition of the American Abstract Expressionist painters, entitled Modern Art in the United States, at Tate Gallery. Works by Sam Francis, Jackson Pollock, Barnett Newman and Mark Rothko are particularly arresting. The exhibition reveals to her an elating shifting of ground in painting which fired her imagination.2 Madden is struck by the dynamic work of French-Canadian artist Jean-Paul Riopelle. His work is an important influence at this time, evident in her palette-knife paintings of 1957–8, whose source of imagery is derived from the glaciated limestone formations of the Burren.
group exhibition
Artists of Fame and Promise, Leicester Galleries, London.

1957
Lent studio by the Royal College of Art, where Louis le Brocquy is teaching. Paints Aran Field.
Operated on for the third time, with bone grafted to unstable vertebrae. Further eight months confined in a full-body plaster cast. Louis makes daily visits. In September, after she learns to walk again, the pair make a convalescent trip to the South of France. 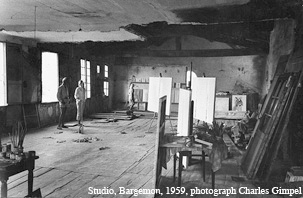 Private marriage to Louis le Brocquy on 8 April in the Chapelle des Martyrs at Chartres Cathedral in France. The couple move to the South of France on recommendation of Anne’s surgeons, to a house in Bargemon, rented from a journalist friend. Buy ruined water-mill near the village, intending to make it their home. They paint in this rickety building for a year, but severe flooding undermines its structure, forcing them to move.
group exhibition
Artists of Fame and Promise, Leicester Galleries, London.*

1959
solo exhibition
First solo exhibition takes place in the Hogarth Room at the Leicester Galleries in London: it consists of 24 works, including Meadow with Sun (1958) and Aran Field (1957).* A review by Nevile Wallis states that Anne’s paintings ‘reveal a refined and very feminine sensibility and a mode of abstraction responsive to it … [her work] possessing a quality of quite exceptional sensitivity and charm’.3 John Berger writes with regard to Meadow with Sun: ‘Here one can see the true nature of Madden’s imagination. It is poetic, spontaneous and very close to physical sensation…’4
group exhibition
Recent Acquisitions, Contemporary Art Society, London, The Arts Council, London. Meadow (1958), which the Arts Council purchased that year, is included.*