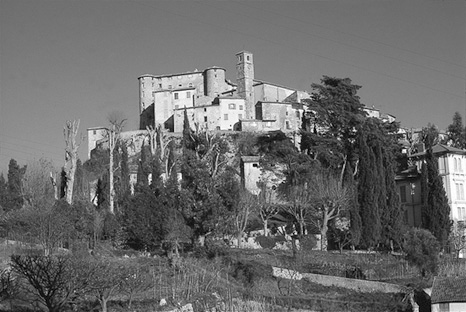 Near the dramatically sited medieval village of Carros, Anne and Louis discover Les Combes, an early 19th-century villa set in old olive groves, in the foothills of the Alps behind Nice. They make their own olive oil and wine and set up studios in separate rooms of the house.
solo exhibition
Dawson Gallery, Dublin.

1962
Build a studio which they share at Les Combes, designed by architect Michael Scott’s partner, Ronald Tallon (of Scott Tallon Walker Architects). Madden writes in her journal: ‘I think we were sometimes useful to one another because of the intimate knowledge of the other’s work – it’s striving towards.’ They are able to offer each other another eye. Francis Bacon often reiterates their luck in this respect, which he says he longed for.

1963
Birth of son, Pierre Albert Xavier, in London.
Madden and le Brocquy join Amnesty International, after reading Peter Benensen’s famous letter in the Sunday Observer in 1961.
Its literary editor, Terence Kilmartin, is an old friend of le Brocquy and often comes to stay
at Les Combes. Madden embarks on a major series of poured paintings inspired by the Burren in County Clare. Paintings become more abstract and are made by pouring pigment, allowing a large measure of autonomy, which is both precarious and exhilarating. In many works at this time, Madden mixes sand with the paint.

1964
Meets Jean-Paul Riopelle with Louis’s dealer Peter Gimpel in Golfe Juan. They often sail with Riopelle in the summer. Through him, they meet Pierre Matisse, the painter’s son and founder of the Pierre Matisse Gallery, New York, who also becomes a friend.
Sees Matisse Chapel in Vence and early Matisse paintings in Pierre’s house at Saint- Jean Cap Ferrat. She particularly focuses on Matisse’s inspirational paintings of 1911–17, which she later sees in Paris and MoMA, New York. Visit Paris and acquire a small studio in the 14th arrondissement, on the suggestion of Karel Appel. In Paris, they meet and become friends with Stanley William Hayter of Atelier 17, and his wife Desirée; Pierre Soulages; the Chinese painter Zao Wook-Ki; Alberto and Diego Giacometti, painter Joan Mitchell (Riopelle’s companion); poets John Montague and Jacques Dupin, and many others. Inauguration of the Fondation Maeght in Saint-Paul, designed by Josep Lluís Sert, architect friend of Joan Miró, with a sculpture maze by Miró (which was later called the Labyrinthe Miró), in close collaboration with the ceramicist Llorens Artigas, and a Giacometti courtyard.
Meet many artists (such as Joan Miró, Antoni Tàpies and Eduardo Chillida) as well as poets and writers who travel south in summer. A pattern emerges over the next years of a dual existence. Most of the year is spent at their retreat, Les Combes, where they serve their work in the studio, alone for long periods of time. The summers in the South, in sharp contrast, are spent with artist friends, visiting the Fondation Maeght’s summer exhibitions, and attending the arts festivals, such as Avignon, Aix-en-Provence, Menton and Nice’s Jazz Parade.

1965
Represents Ireland at the Quatrième Biennale de Paris, Musée d’Art Moderne de la Ville de Paris. The works Island (1963–4), Transformations (1964), Reflections (1965) and Cumulus (1965) are exhibited. A review by American poet John Ashbery states: ‘Anne Madden of Ireland is among the very few original artists in the Biennale. In her abstractions, rough-hewn white lozenges appear like sails on a black or dark blue background, with a strange urgency’.5*
While in Paris, at the suggestion of Jean-Paul Riopelle, makes sculptures at Clementi Foundry in Meudon, including Tree, Triad and several Dyads, which are cast in bronze and gold in the lost-wax method (cire perdue). The Cornish painter and critic Patrick Heron and his wife, Delia, stay at Les Combes; Patrick is full of his prolonged contentious correspondence with New York critic Clement Greenberg on the subject of American ‘cultural imperialism’.

1967
On 9 December, receives a telegraph from the British Foreign Office stating that Vivian (her sister, aged 37) and husband John have been killed in a plane crash in Peru, along with all passengers on board. They leave behind three children – Luke, Nicola and Gerard, aged between eight and 14 – to whom Anne becomes co-guardian. Realizes a series of large serigraphic prints on Perspex (see Herbert J. Appleson op. cit.). The large triptych Land Forms (1967) is purchased for the New York collection of Joseph H. Hirshhorn for the future Joseph H. Hirshhorn Museum and Sculpture Garden, Washington DC.
solo exhibition
Leicester Galleries, London. The exhibition includes Clare Land (1967) and other oil paintings on canvas, as well as a group of 15 silver-plated bronze sculptures entitled Dyads. Colour becomes an increasingly important element in the work, evident in the painting Quadripartite 1967 Mountain Sequence, red. (Catalogue: Catalogue of an Exhibition of Paintings and Silver-plated Bronzes by Anne Madden).*
group exhibition
First Edinburgh Open 100, Edinburgh.

1968
In Paris, meet the young ‘nouveau philosophes’ with their friend Jean-Marie Benoist, himself a philosopher and assistant to Claude Levi-Strauss at the College de France. They include Bernard-Henri Levy, Philippe Sollers and Marcelin Pleynet – all of whom are contributors to the avant-garde quarterly Tel Quel (which later becomes L’Infini). Many discussions ensue in Paris and Les Combes with them and Richard Kearney, whom Anne meets in Dublin and Paris. Student barricades in Paris in May followed closely by Anne from Les Combes. A feeling of intellectual ferment pervades France. Feels that the ‘dusty old pillows are being removed from stifled face of France after two World Wars and German Occupation’.6 London vivid with upsurge in art, fashion and music.
solo exhibition
Dawson Gallery, Dublin. The exhibition includes 21 paintings and 16 silver-plated bronze sculptures, entitled Dyads and Triad. James Johnson Sweeney, director of the Museum of Fine Arts, Houston (Texas) writes an introductory text.*