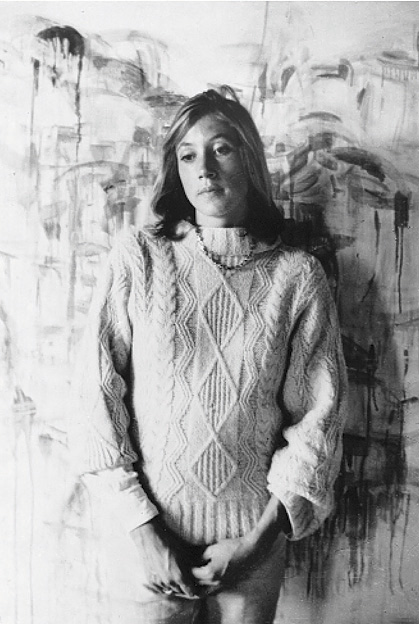 Born to an Irish father and an Anglo-Chilean mother. Both sides of the family live in Chile, where they have held farming/mining interests for four generations. Anne’s mother travels from Chile to London, to give birth to her, the second of four children. Afterwards rejoining the family in Chile, where Anne spends the first four years of her life. Her father, John Gerard Madden Simpson went from Chile to be educated at Ampleforth College, England; followed by University College, Oxford, after which he had returned to Chile.

1936
Family leaves Chile to live in Ireland and England.

1939
Britain declares war on Germany. Madden’s father, over-age for active service in the Army or Navy, is made an officer in Royal Air Force Volunteer Reserve Intelligence 1940–5.  Remembers her father speaking of the vital need to defend democracy against the threat
of fascist Nazi Germany. With her sister Vivian, is sent as a boarder to the Convent of the
Holy Child in Harrogate, aged seven.  Unhappy experience.

1941
Overjoyed at birth of brother Jeremy.
At nine years old, is fascinated by stones, and breaks them open to discover their invisible magic crystals. Her great-uncle Harold gives her two meteorites; her mother, large pieces
of amethyst and malachite – her most precious possessions.

1942
Anne goes to Wychwood School, Oxford as
a boarder.  The liberal education includes debates, music, drama, art and sports. Writes and directs plays. Frequents the Pitt Rivers and Ashmolean museums and Blackwell’s bookshop, and also visits many Oxford colleges. School holidays are spent in the heart of Exmoor, away from bombs in London. Feeling of freedom riding and hunting over this wilderness.

1943
Vividly remembers watching a 14-year-old Chinese calligrapher making his signs in ink with such effortless skill that he gave her hope of one day acquiring some of her own. Becomes interested in Chinese landscape painting and poetry (170 Chinese Poems, translated by Arthur Waley). At home, pores over books of Michelangelo and Cézanne.
At 11 years old, boycotts art class at school
in Oxford. One of her paintings (Flight into Egypt) had been selected and sold, without her knowledge or consent, by the British Council for the European touring exhibition Children’s Art, organized to benefit Europe’s refugee children. Feels very let down by the school and writes in journal, ‘Could they not see that the painting was absolutely without merit?’

1945
Returns to Ireland with her father and meets friends and relations with whom he had spent his school holidays. Stays with her godmother, Audrey Douglas, near Corofin, County Clare. When holidaying with her there, she discovers the Burren wilderness. This has a profound influence on her as a teenager, becoming source material for her early paintings: the Burren Stone Age megaliths and standing stones influencing later work in the 1970s. Remembers feeling convinced she had little bits of brain in her fingertips and would discover the world through her hands. Father plans to move to Ireland, acquiring Clareen and its lands in North County Tipperary.

1947
Father killed in car accident on icy winter roads. Sees newsreel of the liberation of Auschwitz in 1945 at a Leicester Square cinema with her sister Vivian. These shocking images are imprinted on her mind. Sick leaving cinema. Reads John Hersey’s book Hiroshima with the same horror.
1948
School expedition to see Van Gogh exhibition at the Birmingham City Art Gallery, which makes a big impact on her, especially the excited energy of his last paintings. At Oxford, sees Benjamin Britten conducting Billy Budd with Peter Pears in the title role, and Denis Matthews playing Beethoven piano sonatas.

1949
In London visits the Tate Gallery, the Courtauld Institute and the National Gallery. Overwhelming sensation at first sight of the sublime clarity of the Baptism of Christ by Piero della Francesca.