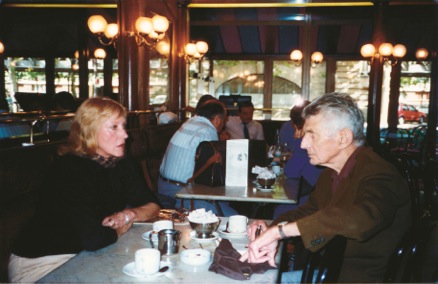 When the painter Louis le Brocquy was a young man of twenty-three years he was introduced to the inside of a human head by a Dublin neurosurgeon who asked him to make a series of drawings of the pituitary gland and its surroundings while he was operating on a patient. Louis agreed to attempt this intricate work since he needed the five pounds he was offered for it. During the long hours of surgery he became more and more fascinated by the whole structure of the region behind the forehead, “the pituitary gland enthroned upon a bone pedestal over which the chiasma of the optic nerve floats like a canopy, and from behind the gland spring two white wings of bone,” as he described it.1 It was an unimaginable insight into the interior wonder of the human head and may well have been the beginning of Louis’s lifelong obsession with human consciousness, taking him through his encounter with the Melanesian and Polynesian decorated heads in the Musée de l’Homme in Paris, the old Celtic-Ligurian cult of the head, which he came across in the museums of Provence and Ireland, the ancestral heads evoked in his paintings and hundreds of images of Yeats, Joyce, Lorca and Beckett (see figure 1). Speaking at Nice University, Louis said, “Like the Celts I tend to regard the head as this magic box containing the spirit. Enter that box, enter behind the billowing curtain of the face, and you have the whole landscape of the spirit” (qtd. in Peppiatt, 66).

Both poet and friend Jacques Dupin wrote of Louis’s head paintings (translated from the French by the poet John Ashbery):

A human head, an indistinct but familiar-looking face cautiously wears a hole in the canvas – and advances towards us. Its features are blurred, almost effaced, but the intensity of its presence keeps us riveted to its motion. It does not seem as though a painter had shaped this head; at most, he helped it to be born, forced it to disengage itself from the white shadow in which it lay buried. It is not defined by a contour, nor by the successive contributions of brush stroke and line. Rather the form, organically erected like a slow coagulation of space, seems to rise implicitly out of the suppression of everything that might be foreign to it. What it offers is not the appearance of a face but its inner construction, the facets and tensions of a being in the act of becoming.
(qtd. in Walker, 104)

His au revoir “come back soon!” accompanied us, as we left him standing on the boulevard Saint-Jacques outside the PLM.
Following this visit, long talks on the telephone ensued from our home in the south of France, and Sam sounded stronger and in better form but said he forgot everything: “the ruin of the mind.” Jérôme Lindon had reported his mind to be in perfect order. I think Sam was uplifted by Godot at The Gate, by the public response and by the full houses with so many young people coming to them as well as the many messages from friends about the production. Michael Colgan’s future plans to produce all his plays for theatre, radio or film in a world-wide event was an exciting project for Sam to contemplate.
The birth of Waiting for Godot at the Gate had taken place and now the production would grow and change. Unfortunately the costumes Louis painted “disappeared” and couldn’t be found according to Michael Colgan, but some of the drawings he made are illustrated in the programme for which Michael had asked me to write an introduction. This adventure had in some way brought our friendship to Sam even closer. The last year of his life, we saw him several times in his sparse little room at Tiers Temps, the Home he stayed in after a bad fall in the summer of 1988. We came with a bottle of Bushmills whiskey one September evening of 1989, as he had run out, which caused his response “no beating about the bush with you two.” “It helps,” he murmured, as he poured the whiskey into three little glasses. From his chair Sam set out to fetch the water from the fridge, both a ritual manoeuvre and a trial. “How will I get back?” He accepted no helping arm; it had to be accomplished alone. Sam was so thin and frail we wondered if he would get through the winter which he faced with dread. We left him feeding sparrows with crumbs outside his room on the path where there was a little green wooded patch and he called to us, “come back soon!”
Louis had enquired about Sam’s work: “No, nothing, nothing left.” He had translated Stirrings Still into French, and it would be published by Les Éditions de Minuit in November. He had also translated “Comment dire” into English. The last line, which in French is “comment dire,” in English has the much more ambiguous ending, “what is the word,” ‘what’being the possible answer. There is no question mark. He said these ambiguities were possible in English but did not exist in the French version. We talked of the Gate Theatre and then of the Abbey which was in trouble. Sam and Louis concluded it had always been in trouble: “Remember when Yeats rejected The Silver Tassie?” Sam said bitterly, “it drove Sean [O’Casey] out of Dublin forever.”
Sam’s doctor had driven him a month earlier to see his cottage at Ussy on the Marne. Visibly moved, he recounted how he found it on that summer day up there alone on the hill, the countryside all around and no one to be seen: “I never realized how beautiful it was until I lost it.” He declared he would never return there, and of his writing he murmured again, “nothing, nothing left. It can’t go on much longer.”
We would see him one more time at the end of November. There were various things Sam wanted to discuss. He gave us Soubresauts, the translation of Stirrings Still, with Louis’s two drawings of Sam that he had made during the past six months. “Why Soubresauts, I don’t know,” he admitted, but as Louis said, he was forever leaping beyond himself. Sam wanted to discuss the Great Book of Ireland for which he had selected two possible poems, both early works from the collection Echo’s Bones, one of six lines, “The Vulture,” one of four, “Da tagte es.” He recited them to us and asked Louis to choose one. He chose the latter. On the parchment page Sam would later write the poem beginning with “redeem the surrogate goodbyes.” Referring to the line “the sheet a stream in your hand” Sam said, “The stream of the sheet held in her hand, the sail of the boat going out to sea, but also the bed sheet, the winding sheet.” After an hour Sam suddenly tired. We hugged each other close and long. He was all bones. We left him in the unadorned silence, his penetrating gaze upon us.

Three weeks later Sam died on the 22nd of December.

Sam was a heroic stoic. Many of his characters were invested with this stoicism and dignity in face of the tragic, as well as with his acute sense of the absurd, of the comic nature of things. From his interior isolation Beckett voyaged with enduring courage into the uncharted seas of his art. We perceived in him not only a great artist but an extraordinary human being engaged in his work with an unflinching scrutiny of existence. The significance for Louis of Sam Beckett’s head increased with the deepening of their relationship. In the many images he painted of him after his death, he was further moved by his own evocations of Sam but felt they could never reach the hidden depths of the man. 2

1.         Quoted in Le Brocquy, 46. In the rest of the article, all parenthetical page numbers, without a preceding name, refer to quotations from the same book on Louis le Brocquy.